How to play this Slot Online RISE OF MERLIN ?

Enter a world of magic in the Rise of Merlin, the latest title from slot specialists Play’n GO!

Based around the legendary wizard from Arthurian lore, Rise of Merlin follows the wizard in his younger days before he became the mythical figure he is known as today.

The game is set on a 5×3 grid slot, and all you have to do is match 3 or more symbols across any of the ten winning paylines to pick yourself up a win!

Merlin’s mystic Magical Orb is the Wild and the Scatter in this game, meaning it not only stands in for any other symbol to help create winning paylines but can also be used to trigger the game’s Free Spin feature.

Free Spins can be triggered by landing 3 or more Magical Orbs anywhere on the reels and will give you eight free spins, as well as paying out for the number of Scatters on the reels. You can re-trigger the Free Spins at any time, and you’ll get another eight spins each time.

Once you trigger Free Spins, one symbol will be chosen at random to become your expanded symbol during the spins.

If you land enough instances of your chosen symbol on the reels, firstly any wins you get from your spin will be paid out and then your symbol will be expanded, and any wins will be paid out from the expansion too!

Get ready to cast a winning spell with Rise of Merlin! 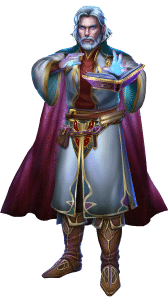 Find the game RISE OF MERLIN on this casino: