How to play this Slot Online RISE OF DEAD ?

Journey into the magical tombs of the Egyptian Pharaohs to uncover the ancient Book of Thoth and unearth the riches hidden within the Pyramids in Rise of Dead!

Rise of Dead is a 5×3 reel, twenty payline video slot with plenty of distinctive features that you’ll love to explore while you play.

The game’s HPs come in the form of three powerful Egyptian Pharaohs Ramses, Thutmose and Amenhotep and you need to match at least two of these along the paylines to scoop up a standard win.

The LPs are represented by 10 through Ace, and you have to match three of these for your base game win.

The sacred Golden Scarab Beetle is your Wild, and it will substitute for any HP or LP symbol to help you pick up even more wins along the way.

The Scatter symbol is the Golden Scroll, and you can use it to activate one of the game’s main features, Ancient Spins.

The game has three main features. As well as Ancient Spins there’s also Mega Stacks and Gift of Gods, all designed to help you reach your big wins!

Mega Stacks are stacks of 12 consecutive spaces on each reel that will randomly be filled with any HP or LP symbol so, during your spin, they will be running through the reels, allowing a full stack of symbols to land on any given reel.

During your spins, if the Pharaohs see fit, they will invoke their magic to conjure up the Gift of Gods and call forth identical Mega Stacks on the first, third and fifth reel.

There is also a chance for the second and fourth reel to display the Meg Stack during the Gift of God feature, blessing you with a full grid and big wins!

The game’s crowning feature is Ancient Spins, which you can trigger by landing the Scatter on reels 1, 3 and 5 and, once triggered, you will be given 10 free spins.

During Ancient Spins your HP symbols have a chance to become expanded on the reels to give you more winning lines.

After every spin, any HP symbols that form part of a winning line will become expanded. Firstly, all other winning symbols will pay out; then the HP symbols will expand and pay out any wins!

But that’s not all; Mega Stacks are also still active during Ancient Spins. Any LP symbols can be stacked, and they will take up eight consecutive reel spaces, and Wilds will also become part of Mega Stacks and will appear stacked in groups of 6 or 7 on the reels.

If you get any more Golden Scrolls on the reel during Ancient Spins, then you will be awarded more free spins, depending on how many scrolls land on one spin:

There are no limits to the number of free spins that you can be granted during the feature!

Unlock the ancient knowledge and win with Rise of Dead! 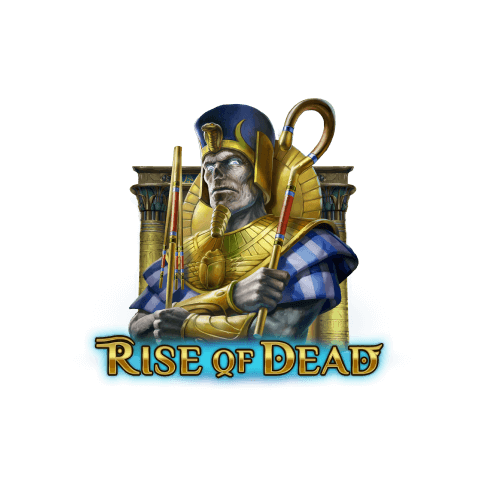 Find the game RISE OF DEAD on this casino: